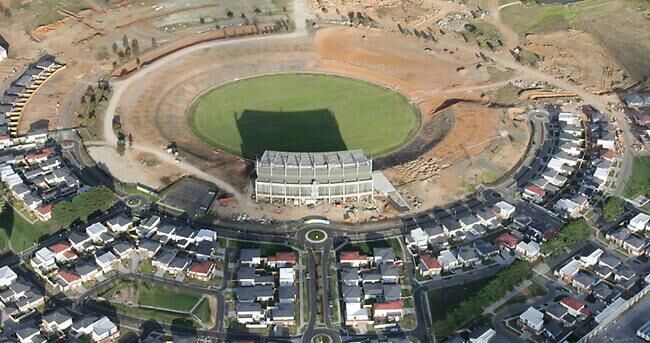 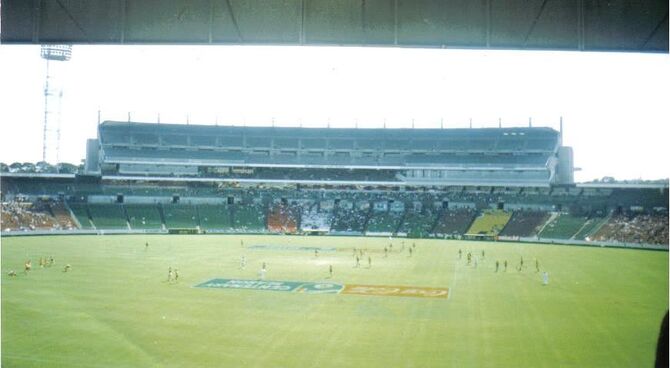 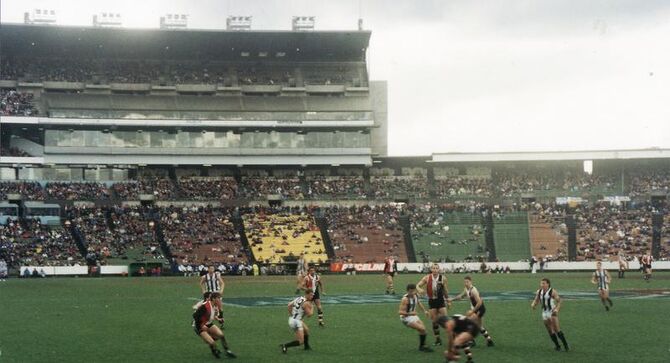 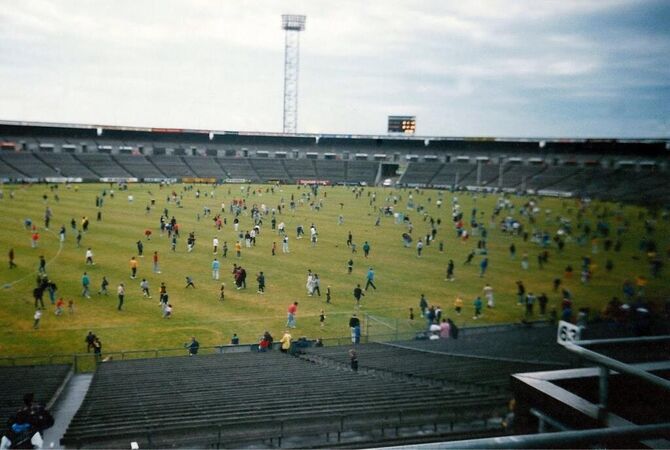 Waverley Park (originally VFL Park) was an Australian rules football stadium in Mulgrave, Victoria, Australia. For most of its history, its purpose was as a neutral venue and used by all Victorian based Victorian Football League/Australian Football League clubs. However, during the 1990s it became the home ground of both the Hawthorn and St Kilda football clubs. It was later replaced by Docklands Stadium. It is currently used as a training venue by Hawthorn. The main grandstand and oval are listed on the Victorian Heritage Register.[1] The seating capacity is now 2,000, down from a peak of 78,000.

Waverley Park (then VFL Park) was first conceived in 1959 when delegates from the 12 VFL clubs requested the league to find land that was suitable for the building of a new stadium. In September 1962, the VFL had secured a 212 acre (860,000 m²) block of grazing and market garden land in Mulgrave. This area was chosen because it was believed that with the effects of urban sprawl and the proposed building of the South-Eastern (later called Monash) freeway, the area would become the demographic centre of Melbourne. The VFL reportedly lobbied the state government to construct a train connection to the stadium, but this never occurred.

The original plans were for a stadium catering for up to 157,000 patrons, which would have made it one of the biggest stadiums in the world. To accommodate the large number of patrons the members' stand was to be extended around the whole ground. However, in 1982/1983 when the extensions were due to commence, the Government of Victoria refused to approve the plans for the upgrade because it would have threatened the Melbourne Cricket Ground's right to host the VFL Grand Final (the league owned VFL Park had originally been built with the intent of replacing the MCG as the permanent home of the grand final, but the Victorian government, with interests in the MCG, refused to allow its capacity upgrade). Hence, no further development ever occurred and the capacity was set at just over 100,000 patrons (later reduced to 78,000).

The playing surface of 200 metres long and 160 metres wide was the biggest in the league. This caused some controversy and the boundary lines were repainted and goals were relocated to make the playing area a similar size to the MCG's playing surface.

Under the direction of architect Reginald E. Padey, work was started at the site on 5 January 1966 when the VFL President Sir Kenneth Luke turned the first sod. On construction of the stadium, a total of 378,000 cubic yards (289,000 m³) of topsoil was excavated and the surface of the oval was lowered to a depth of 10 metres from the surrounding area. The soil was used to form the banks for some sections of the stadium.

The foundations for the K.G. Luke stand were laid in 1969 and more than 20 kilometers of solid concrete terracing was laid around the ground.

Finally, on 18 April 1970, Fitzroy and Geelong played the first game at Waverley Park, to a crowd of 25,887. However, the stadium was far from completed. In fact the only section of the actual grandstand that was built was the first level of the K.G. Luke Stand. The rest of the stadium had only been completed on the ground level.

The Public Reserve Stands encircling the rest of the stadium were finished at a cost of $4.5 million in 1974 and the car parking was extended to fit a total of 25,000 cars. Lighting was added in May 1977, at a cost of $1.2 million, for the first of the 1977 night series televised matches.

In 1982 a monochrome video matrix scoreboard was in operation at Waverley Park for the first time in VFL history, displaying instant replay highlights. In 1984 the arena was re-turfed and the drainage system upgraded. Two years later a mosaic mural perpetuating many great names of VFL football was installed on the grandstand facade above the members' entrance. During the 1988 season automatic turnstiles were introduced at the members' entrance.

In its history, 732 AFL/VFL matches have been played at Waverley Park, 70 of which were finals and one grand final.

Perhaps the beginning of the end for Waverley Park was in 1988 when concrete cancer was discovered in the Southern Stand at the MCG. This provided the opportunity to replace the 50-year-old stand with a state of the art facility that was completed in 1992 at a cost of $150 million, subsequently named the Great Southern Stand. This affected Waverley Park's attendances as the ground once hosted many blockbuster games and finals, they were then mostly moved to the more modern, larger and more centrally located Melbourne Cricket Ground where the ground could handle up to 100,000 spectators compared to 78,000 at Waverley.

In 1999 the Australian Football League announced that it would not schedule any further matches at Waverley Park. Instead it would aim to sell the ground and its surrounding land, hoping to raise a sum of $30 – $80 million to go towards the construction of a new stadium under construction at Docklands at the western end of the Melbourne central business district. Later the League would also argue that a portion of the income from the sale of Waverley would provide further finance for the development of AFL football as a national code in Australia. The last official AFL game was played in 1999 between Hawthorn and Sydney in front of a sell-out crowd of 72,130.

After the decision to close the venue was made by the AFL, the ground's drawbacks were highlighted.

Despite an excellent playing surface and its own water storage, focus shifted to its unfavourable position, and its antiquated corporate and spectator facilities, such as the 17-year-old sepia-toned video screen. Even though Waverley Park was only 20 minutes from the Melbourne CBD and was serviced by a major freeway, successive governments had failed to provide adequate public transport to the venue; the stadium's car park was large enough to service its crowds, but the access roads were incapable of dispersing them, and long delays for driving spectators were common. Spectators felt distanced from the game in the huge arena, and seating was only partly undercover, giving it the unflattering nickname "Arctic Park"[5] thanks to its location on an exposed site, with the prevailing south-westerly winds bringing rain to Melbourne's eastern suburbs directly from Port Phillip.

After the 2000 VFL Grand Final, Waverley Park was not maintained and vandals broke onto the site smashed windows, sprayed graffiti on walls and one of the super boxes got trashed. The playing surface, once one of the best in Australia, was reduced to a field of weeds. Victorian MP Mary Delahunty called on the AFL to mow the dilapidated stadium, as it was still under their control.

On 10 December 2001 the AFL confirmed that the land was sold to housing developer Mirvac to assist in financing the construction of the now complete Docklands Stadium. The ground was demolished starting on 11 December 2002.

While often seen as something of a failure, Waverley Park actually served an important strategic purpose for the VFL/AFL. With a viable alternative venue for the Grand Final and other events, the AFL possessed a critical bargaining chip in negotiations with the Melbourne Cricket Club over MCG access.

Following its cessation as a venue for AFL football, the stadium fell into a state of disrepair, and anticipating complete demolition, the National Trust of Victoria moved quickly to nominate the members' stand for heritage listing on the basis that the stadium was the first major stadium purpose built for Australian rules football, that it hosted the 1991 AFL Grand Final, and that the members' (or K.G. Luke) stand features a mural of football legends by artist Harold Freedman.

Successful lobbying saw Heritage Victoria grant legislative protection to the site and, beginning in December 2002, the stadium was demolished except for the members' stand and the members' stand mural. The surrounding parking lot has been replaced by suburban housing, including 1400 new dwellings for 3500 people. The members' stand is visible from the nearby Monash Freeway, however due to new noise walls being installed on the freeway alignment, the stand's visibility from the freeway has been significantly reduced.

The oval itself and the remaining section of the members stand have been redeveloped into a state-of-the-art training and administrative facility for the Hawthorn Football Cluband the local community. The facility incorporates an MCG-dimension oval, the size of the playing arena having been reduced from its original size, and includes a 25 metre heated indoor swimming pool, four refrigerated ice tanks, a gymnasium with a 60 metre running track and a warm-up area with projection and screen facilities to simulate match-day conditions. The grandstand has seating for around 2000 patrons with the seating in the top level of the grandstand having been retained.

Community content is available under CC-BY-SA unless otherwise noted.
Advertisement